BIG NEWS-
Little owl manage to fly to Atlanta in time for halloween,
I have received information on the arrival of Little owl, despite the NZ Post office stating he would take 2 weeks to make the journey, Heather has informed me little owl  arrived on Saturday 29th in time to have a rest before sitting ( hanging) on her halloween tree.

Happy Hallows everyone I see the children already on the street here door knocking. Tomorrow All Saints Day is the Special Day in our household.

The little Owl is flying to....... well not quite yet he needs to kinow where to go to.
Caitlin checked in on the blog yesterday after Junior embroiderers and declared the winner is .........................................geeky Heather as she is the only one to have completed all the requirement. and those were to leave a comment on the posting and also be a follower of this blog. so Heather contact me with a name and address and little owl will be on his way to you.

It is school holidays here and we had an extra catch up day for the Junior Embroiderers before the start of the new term, one of the girls was followed in by a younger sister who had a big question to ask?
"How old do you need to be to join  and learn to stitch? " Maree who helps with juniors calls everyone poppet and "H" was truly a little poppet. I asked how old she was and with big pleading eyes she said her age was 6yrs. I turned and asked Caitlin my grand daughter who was at the table stitching what age was she when she started. The reply was "5 years old " So "H" is starting next week. Here is the earliest photo of Caitlin stitching.... she is now 14 and has never lost her love of stitching, another time I will share some of her work that she has stitched over the years. 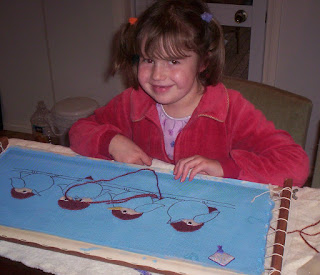 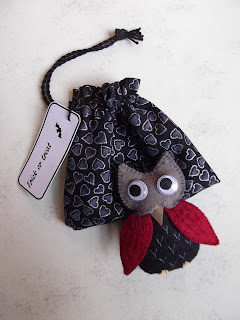 I have had a lot of fun making tiny felt owls. and decided to make a few "Halloween Owls" so named for their dark colours!!!  the one shown above has gone to Canada, another is about to fly off to its new home and I have a third one needing a new home to go to.
If you would like to have that one, become a follower and leave a message here. I will ask Caitlin to do a draw for me on October  18th when the junior embroiderers visit, and if the postman does his part the owl should arrive at its new home in time for Halloween. 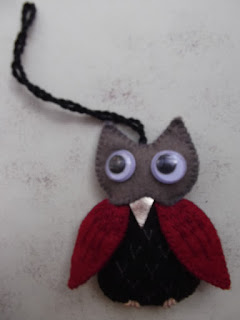 I want to share with you something special, from Rawhitiroa School where my daughter teaches,
The senior room ( there are only two class rooms at the school) as part of their study on Dinosaurs made quilt squares and I had the job of putting them together as a wall hanging. The Wall hanging is titled "When Dinosaures ruled the earth" and it  is now hanging out at school.

Here is the hanging, I'm sorry the photo does not do it justice  it looks much better hanging than it does lying on my floor, but it was the only way I could get it all in the photo. The squares are just amazing and all so different.. 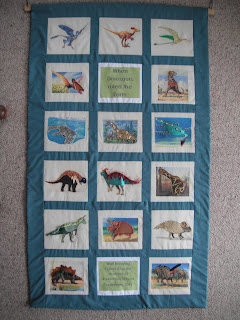 The pictures were transfered on to calico using the same method  as putting a picture on a t-shirt, then each child embelished their chosen picture using a variety of threads, fabric pieces and beads. Some stitching had to be included, here is a close up of one of my favourite squares, note the stitching on the wing 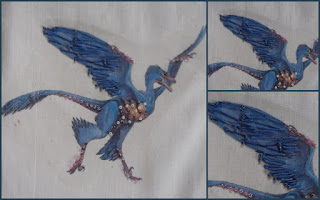 "Where are we going?" said Pooh, hurrying after him, and wondering whether  it was to be an explore or a What-shall-I-do -about-you-know-what.
"Nowhere" said Christopher Robin.
(The House at Pooh Corner.)


I first wrote under the title of "Notes from under the Mountain" about 10 years ago, and then when I started blogging it seemed a natural choice to call my blog the same title. 'Notes' are mainly about embroidery and family, I am hoping that this new blog  .... Other side of the mountain..... will be more a scrapbook about the little things that give me pleasure and I hope might give someone else pleasure to read.
So to the words of Pooh    Where are we going?   I only answer not nowhere but now here... and so here I am launching a new adventure.

I grew up in an era of Winnie the Pooh from AA Milne not from Disney... it was war years and I remember our books had green mottled covers and thickish poor quality paper, we wore them out from love, not carelessness and so when my children were of an age to be introduced to this good friend, new copies had to be bought. Both of them own their own complete set of A.A. Milne books,
Barryn is a batchlor and so his copies are still here and often read by his youngest neice.
We can all quote favourite lines and poems  from these books, the piece I quote  often- is the last verse of the poem Teddy 'Bear' found in the book- When we were very Young.
A bear, however hard he tries,
Grows tubby without exercise.
Our Teddy Bear is short and fat
Which is not to be wondered at;
But do you think it worries him
To know that he is far from slim?
No, just the other way about?
He’s proud of being short and stout.
Do you have a favourte A.A. Milne poem ?
Will you leave a comment and share?
Thank you for dropping in. come again sometime and see what I have added
.﻿

Lee
I was married to Paul for 49 years, and we have two grown up children. A retired florist, my love of flowers extends now to my embroidery designs. A keen genealogist and I now have a blog for the Randall/Skinner branch of our family. I have enjoyed scrapbooking and that interest lead me to having a blog

Blogs I love to visit.